Enlightenment Defended will create an open realm of vigorous philosophical debate through animation, documentaries, poetry, humour, music and myth. People are many-sided in both apprehension and enjoyment.
Interested? Want to learn more about the community?

Dr Ray Scott Percival@DrRayPercival
January 12, 2022
The Nuremberg Code, Vaccine Mandates, and The Spirit Behind the Code.

I’ve been reading about the history of the Nuremberg code and it’s surprisingly interesting. The book is Nazi Medicine and the Nuremberg Trials: From Medical War Crimes to Informed Consent, by Paul Julian Weindling. It's a story of hard-won incremental moral progress.

This helped me express some key points when referring to the Nuremberg code.

When I read the code (attached below), I considered the spirit of the code and not just the letter.

Morality trumps legality: even if the code is not a legally enforceable document, it has great moral import. The Nuremberg code is part of our accumulated corpus of ethical thinking that we can draw upon in meeting new moral problems. The fact, emphasised by some, that it is not a legal document stating a law with ready enforcement mechanisms, ought not to distract us from its greater worth as a moral compass. And it, along with other documents has, since its publication in 1947, enriched the formulation of our moral and legal codes. Ideally, laws are shaped and sometimes abolished by morals, not morals by law. Martin Luther King Jn., made a related and profound point when he said:

"One may well ask, 'How can you advocate breaking some laws and obeying others?' The answer is found in the fact that there are two types of laws: There are just laws and there are unjust laws. I would be the first to advocate obeying just laws. One has not only a legal but a moral responsibility to obey just laws. Conversely, one has a moral responsibility to disobey
unjust laws."
[Martin Luther King Jr. on Just and Unjust Laws
Excerpts from a letter to fellow clergymen written from Birmingham City Jail, April 16, 1963.]

The recognition that morality is a far larger domain than law is itself a product of enlightenment thinking, and the conflation of law and morality is only seen today in dark-age theocratic monstrosities such as Iran's government.

Weindling argues that the judges, led by Justice Sebring, said that although the code was not intrinsic to their verdicts, it helped them to reach their verdicts. Charges of manslaughter, murder, assault and battery were more central and often sufficient. It seems that the code helped to refine the ethical boundaries and landscape of their thinking.

The number one principle of the Nuremberg code, echoed in other important humanitarian principles and laws, is the principle of informed voluntary consent. This is unpacked as the absence of any coercion, “duress” or “overreach” and the liberty to withdraw at any stage. Logically, duress and overreach seem to cover the pressure to take a vaccine or booster to retain one's employment. The case would be different if the requirement were part of the original employment contract, as opposed to imposed out of the blue post-contract. Typically, people who work in dangerous fields such as mining and construction are made aware through their original contract of the risks they face and agree explicitly to take those risks in advance. It would be outrageous for employees to be suddenly presented with them halfway through their employment.

Also crucial in the Code is the demand that the experiment must benefit society in a way not procurable in any other way. This is a point Dr Peter McCullough emphasises in his promotion of the discussion of pre-hospital treatment in a context of heavy and ubiquitous censorship. Dr McCullough calculates that such measures may have saved hundreds of thousands of lives. (Dr McCullough does not argue that treatment was a certain complete alternative to vaccines, but rather argues more subtly, that it undermines the requirement for mandates as such.)

Much rides on what an “experiment” is. The rollout of the vaccines is not taking place in a lab with minutely controlled conditions and trials. It does not look like an experiment in the public’s mind. But it is an experiment in a broader and possibly more ominous sense: it is a risky trial upon the whole population of unknown duration by emergency authority with explicit immunity against legal complaints about adverse effects. Can you imagine the look on the faces of the judges at the Nuremberg trials if the defendants had claimed that their experiments were acceptable as the German state had given them an open-ended emergency authority for their procedures and immunity from any future complaints against them such as the arrogant allied Nuremberg court proceedings?

The authors of the Nuremberg code, Leo Alexander and Andrew C. Ivy, were trying to formulate principles that might alert us and save us from other future possible tyrannical policies.

“Ivy nurtured the judicial interest in the Code ‘so that something of a preventative nature had to come out of the “Trial of the Medical Atrocities”’. Nazi Medicine and the Nuremberg Trials

As a bonus, they improved on the then protocols of the American Medical Association, which neglected the explicit requirement of voluntary consent, though in most cases that would have been tacitly known and followed. The allies were not even sure at first if there were such a thing as, and what might constitute, a medical war crime. The allied prosecution team confessed that they learned much from the sophisticated Nazi defence spear-headed by Rose and Brandt, which attacked medical practice in the USA, which at that time had used prisoners as experimental subjects, and other allied countries such as Britain where a Professor McCance had used terminally sick babies with meningoceles for experiments. McCance had not asked for parental permission. The defence’s attempt to turn the tables on the prosecution is expressed by the Latin adage tu quoque - lit. and you too! Confronted by this cunning manoeuvre by Rose and Brandt, the allies found themselves in a vulnerable place and to get the convictions it is arguable that Ivy gave the Tribunal the impression that the consent procedure at US penitentiaries was more formalised than it really was. The point is that Alexander and Ivy not only succeeded in condemning the Nazi atrocities but also sharpened the allies’ own ethical conceptions through this clash. Let’s not throw away that hard-won advance in civilisation through complacency.

Totalitarianism never arrives in the same outfit. Alexander and Ivy, astute minds, were thinking not only of possible future tyrants that let us know they are here by conveniently arriving on the stage of history in conspicuous Nazi clothing brandishing Swassticker symbols, but of precisely stated universal ethical principles of human medical experimentation whose violation (or adroit bending) may serve as a warning signal of a totalitarian tendency, whether or not that tendency be accompanied by jackboots or flip flops or purple-haired vegans or goaty-bearded meat-eaters. 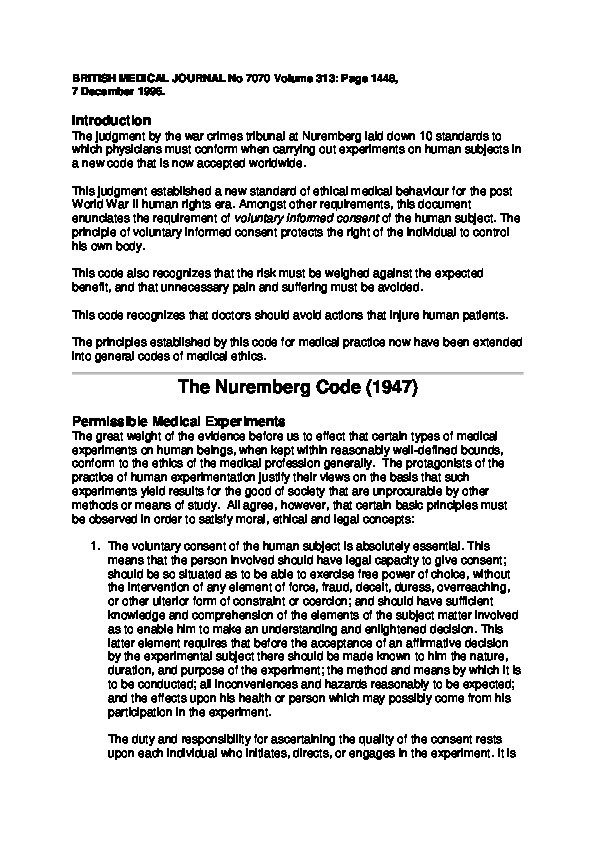 Are we in danger of sacrificing our liberty, bit by bit, for increments of illusionary security?

Our answer is that the least secure existence is one in which we have sacrificed our personal autonomy. We recall Immanuel Kant's conception of Enlightenment, which flows from the individual, not the state or any other external guide.

The motto of enlightenment is therefore: Sapere aude! [Dare to be wise!] Have courage to use your own understanding!

Laziness and cowardice are the reasons why such a large proportion of men, even when nature has long emancipated them from alien guidance (naturaliter maiorennes [Those who have come of age by virtue of nature]), nevertheless ...

Alex and Ray at Bold Venture Park, Darwen, United Kingdom. Darwen was one of the centres of the industrial revolution, a fundamental catalyst of the Enlightenment. Samuel Crompton, the inventor of the spinning mule, lived here for part of his life. It was a thriving town of cotton goods production, coal mining and quarrying, connected by canal and rail to nearby hubs of invention and production- Bolton and Manchester.

In this video, we see a wonderful carving in the local strata outcrop in one of the large parks that adorn Darwen. Transporting us back in time to the people who worked in the burgeoning revolution that gave us so many life-transforming benefits, the sculpture depicts a quarryman lying on the boat that will carry him across the Styx. By the side of the sculpture is the inscription: Who Pays the Quarryman? Many quarrymen lost their lives in this work and a play of words alludes to the myth of the journey across the Styx and the Ferryman who guides the boat across.

Dr Ray Scott Percival@DrRayPercival
May 31, 2022
The Price of Knowledge

Accepting the state's incremental totalitarianism through its allurements to "safety" is to embrace a child-like dependency and shun the risky but beneficial adventure of the growth of knowledge.

Embracing risk is part of the price of one’s emergence from the delightful delusion of absolute safety - the repeated allurement of state intervention. But shunning absolute security is rewarded by the opportunity to stand on the shoulders of nebulae and reach out and stretch the boundaries of the known - and, paradoxically, enhance our safety by degree. The more knowledge we have the more control we have, the more control, the more secure we are against future threats. No knowledge growth without risk.

Dr Ray Scott Percival@DrRayPercival
February 24, 2022
Pushed into the Arms of China?: Collaboration between Russia and China

A discussion of the "Joint Statement of the Russian Federation and the People’s Republic of China on the International Relations Entering a New Era and the Global Sustainable Development".

Dr Ray Scott Percival@DrRayPercival
February 08, 2022
Is the Mind the Source of all Progress?

Alex Brocklehurst has just had a chapter published in the book Jordan Peterson: Critical Responses.
https://www.amazon.com/Jordan-Peterson-Critical-Responses/dp/1637700121

Roger outlines the Ukrainian crisis, placing this delicate strategic confrontation in its historical and demographic context. Ukraine is a vital strategic interest to the Russian state, but not to the United States of America. Roger argues that states typically regard security as paramount, trumping economic interests and will accept a great deal of damage maintaining their vital strategic interests, and so the West’s threat of economic sanctions are impotent. Is the West playing a losing hand, given that Ukraine is perceived by Russia as a vital buffer zone right on its doorstep, but is 5000 miles from the US? Roger asks us to imagine a mirror of the situation for the US: Russia stations forces in Mexico and Canada, or simply establishes alliances with those countries. Such a move would be intolerable for the US state under the well-established Monroe doctrine.

(Some sources —for example, the omniscient POLITIFACT, argue that NATO has reneged on an agreement suggested by ...

Dr Ray Scott Percival@DrRayPercival
October 03, 2022
The Adverse Effects of the State-imposed “vaccines” are not Going Away.
0
View All
0
Reply

Defending the Enlightenment through animated philsophy.

An autonomous life is one in which we can make a difference according to our own aims and plans. This is the personal aspect of the enlightenment. However, this is under threat from a perverted alliance of governments and the tech giants.

Enlightenment Defended will create a realm that frames our deepest thoughts about life through articles, documentary, animation, poetry, humour, music and myth and philosophical debate. People are many-sided in both apprehension and enjoyment.

7
View All
0
Reply
Don’t have a Locals account yet? SIGN UP
I’m already a member Log in
Please keep this window open while your file is uploading...